Fortified Ankles is a Legs  Cyberware in Cyberpunk 2077. Cyberwares are implants that players can install, exchange, and upgrade into V's body to obtain passive buffs and various active effects that provide different combat tactics and many more. Each cyberware is categorized in different rarities from Common up to Legendary cyberware.

Rare and Epic versions can be bought from Finger's M.D. at Japantown, Westbrook 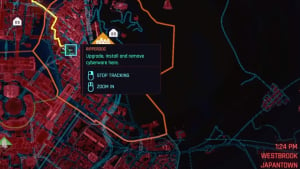