Ripperdoc Arroyo is a Ripperdoc in Cyberpunk 2077. Ripperdoc Arroyo are in charge of the upgrade of Cyberware and Mods. This technology allows V to gain new abilities and may improve certain aspects such as Combat by creating cyber-limbs or powerful blades from your arms, Implants that add specific functions to the body, etc. Ripperdocs can be found throughout Night City and their enhancements can be acquired for the right amount of money or Street Cred.

A ripperdoc lies somewhere between a surgeon, techie and tattoo artist. If you're lucky, you pay them a visit to get yourself chipped with the latest implant on the market because you can afford it. If you're unlucky, a friend will drop you off at their clinic in pieces and hopefully they can put you back together.

People usually have their favorite clinics and trusted rippers that know their bodies better than they do themselves. It's definitely not worth going out on a limb (no pun intended) and looking for the cheapest deal - especially in Little Chino or post Rancho Coronado, where some ******* will chip you a second or third-hand piece of junk with a nasty virus thrown In free of charge.

Corps obviously don't have to hunt for the best deals because they have their own corporate rippers. Their high quality services ore free, their clinics smell like a hospital wards, and they have the picture-perfect smiles of braindonce stars - the whole package. What's not to like? Unless, of course, you don't trust the people you work for enough to let them have access to your brain.

The ripperdoc can be found at Arroyo, Santo Domingo. 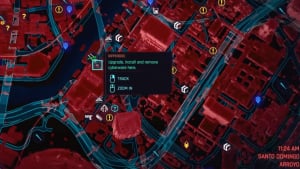 Notes and Trivia about Ripperdoc Arroyo