Ranged Weapons are typically pistols, shotguns or rifles, and can fall under the categories of either Tech or Street. Melee Weapons provide an opportunity for up-close violence, while Ranged Weapons give players the option to kill from afar. Many Weapons can accommodate modules which alter their use and the way they handle: for example a player may acquire a Tech Pistol which they then modify using modules to become a Power or Smart Pistol. The Modules applied to a weapon can alter gameplay mechanics and playstyles greatly.

What are Iconic Weapons in Cyberpunk 2077?

Iconic Weapons in Cyberpunk 2077 are special Weapons with unique perks attached to them that can't be found on any other weapon and are particular for each of them. Once an Iconic Weapon has been obtained you will be granted the blueprint (i.e. Spec) to craft it.

Most Iconic Weapons can be obtained by completing certain Jobs and searching in the instanced locations. Do note that the availability of some weapons are affected by player's dialogue choices and level of task completion. The remaining one third are unlocked by looting the Spec from the bosses in Suspected Organized Crime Activity and player crafting. There are all sorts of Iconic Weapons varying in both type and rarity. Iconic Weapons can have their rarity upgraded via the crafting menu. In addition to relevant components, you will also need the weapon you're upgrading in order to complete the craft.

Power Weapons are the conventional firearms that you will find in this game, since they use traditional ammo and cartridges as opposed to the other two types of ranged weapons. They have a high rate of fire as well as high recoil. Take note that bullets from power weapons will often bounce off and ricochet on hard surfaces. 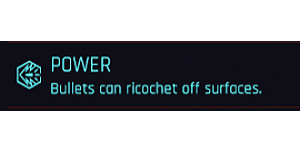 Smart Weapons have guided bullets that track down enemies that are within the weapon's tracking box. The Smart Weapons's bullet can curve around obstacles and hit targets, although they are slower than conventional bullets. 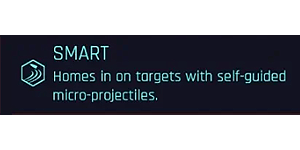 Tech Weapons can be charged to fire and penetrate obstacles, as they use railgun technology that fires bullets with an electromagnetic charge. Take note that Tech Weapons cannot be fitted with a suppressor, so use them when you're planning to take a head-on battle with a group of enemies and avoid using them when you're trying a stealth approach. 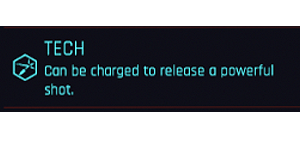 Blades are fast and lethal, perfect for quickly eliminating enemies while using a stealth approach 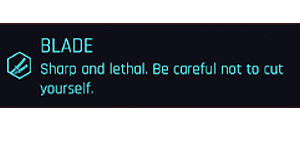 Blunt weapons are heavy, slow, and non-lethal, they usually have a chance to stun opponents. 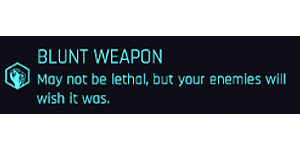 Cyberware Weapons are tech implants players can get installed into their flesh, providing the capability to inflict harm. Cyberware Weapons can only be augmented and replaced by the Ripperdocs. Please visit our Cyberware Wiki for more information. 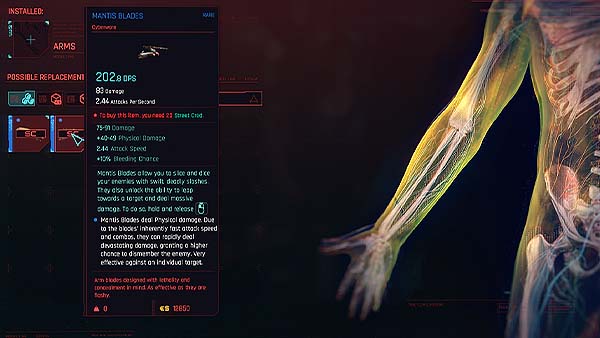 In Cyberpunk 2077, there are 4 Types of Damage namely: Physical, Chemical, Electrical, and Thermal.

Physical Damage is the default damage types for most weapons. This damage type can be mitigated by Armor.

Chemical Damage can cause a poison effect to a target. This damage type can be mitigated by Chemical Resistance.

Electrical Damage a shock effect to a target, it also has a chance to cause an EMP. This damage type can be mitigated by Electrical Resistance.

Thermal damage can apply a Burn effect to a target, which will cause Thermal damage over time. This damage type can be mitigated by Thermal Resistance.

How do Weapon Mods work in Cyberpunk 2077?

Weapons can be upgraded and modified to change their different stats and adjust them to suit your playstyle. In order to upgrade their weapons, players can add Mods into Weapons with at least one slot, that can change both the Weapon's appearance and add or increase specific stats.

Like in most RPGs, Weapons in Cyberpunk 2077 feature a Rarity System including Common, Uncommon, Rare, Epic and Legendary. Weapon Stats, Abilities and Weapon Mod Slots will randomly vary between the different weapons so make sure to check which of them fits your playstyle.

Weapons by Class in Cyberpunk 2077

Power Weapons are the equivalent of known classic guns. They can be used to deal massive amounts of burst damage to enemies, and require the user to aim manually. Power Weapon bullets can ricochet off surfaces providing a lot of versatility and allowing the user to harm enemies behind cover.

Tech Weapons can fire charged electromagnetic projectiles. As with Power Weapons, you'll need to manually aim to your desired target. Tech Weapons can be charged to release a powerful shot allowing bullets to pierce through both armor and cover.

Smart Weapons can scan and track enemies' movements and fire self-guided micro missiles allowing players to hit covered enemies regardless if they are hiding behind walls or any other type of cover. In order to use Smart Weapons, players will first need to install a Cyberware Smart Link on their hands.

Melee Weapons can only be used in close combat and include both One-Handed as well as Two-Handed variants. Depending on the type, they can deal Blade or Blunt Damage. Blunt damage is a great non-lethal damage alternative.

Weapons by Type in Cyberpunk 2077

Double-Barrel Shotguns are ideal for close to mid-range combat, they only have a clip size of two compared to other Shotguns. They work best when your're trying to deal damage up close and when you want to create space against enemies trying to close in.

Heavy Machine Guns (HMG) are obtainable by ripping them off of turrets with enough strength or by taking them from heavy gunner enemies. HMGs also cannot be holstered or stored in your inventory, it will also disable sprinting and when you try to swap weapons, the HMG will be dropped. HMGs usually only carry 300 bullets and you cannot carry any additional ammo for this weapon. Firing an HMG weapon continuously will cause it to overheat and will force the weapon to stop firing for a few seconds.

Light Machine Guns (LMG) are quite similar to the HMG, with a high rate of fire, but lacks precision and accuracy upon firing the weapon. Unlike HMGs, you can actually holster and store LMGs in your inventory.

Similar to the Double-Barrel Shotgun, Shotguns are ideal for close to mid-range combat and these weapons deal a lot of damage up close, perfect for when you're trying to create some space or you're planning to take out an enemy quickly.

Blunt Weapons are melee weapons that are non-lethal, they are relatively slow compared to Blade Weapons, but can usually stun enemies.

Sniper Rifles works best at the longest of ranges when you an encounter an enemy, it is slow to reload and fire, but the trade-off is it can sometimes eliminate an enemy with a single shot. Sniper Rifles require precision to maximize its potential.

Pistols are the main sidearms in Cyberpunk 2077, their damage are considered average compared to the other weapons, but you will always have a backup Pistol on hand when a cutscene or a dialogue demands it.

Revolvers are one-handed sidearms that deal a lot of damage and have improved headshot damage.

Assault Rifles are an all-around ranged weapons, works best at close to mid range combat and typically fires full-auto or in three-round bursts depending on the type of Assault Rifle.

Precision Rifles are semi-automatic rifles that are best used for long-range combat. They are not as deadly as Sniper Rifles, but are better for taking those precise shots at long range as opposed to using Assault Rifles.

Submachine Guns (SMG) are close ranged rapid-fire weapons that works best when you want to deal with enemies that close in.

All Iconic Weapons in Cyberpunk 2077