Locations in Cyberpunk 2077 will be covered on this page. The game's central location is called Night City.

Night City is a city in the Free State of Northern California, on the west coast of the United States. In 2020 (as per the 1988 tabletop game) Night City was home to roughly 5 million people, and in 2077 the city was voted "the worst place to live in America".

The special project of businessman Richard Night, Night City was originally envisioned as a utopia: a shining example for other cities across the nation. 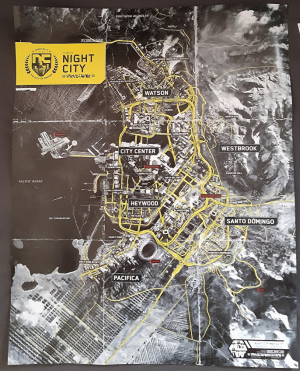 The history of Night City begins with the dream of one man: visionary industrialist Richard Night. In the final years of the 20th century, Night had a vision for a city of the future, one uncorrupted by old ideas and stifling regulations.

Backed by some of the world’s largest corporations, he made his vision a reality through a bold real estate development on California’s Coronado Bay. As the rest of the United States started to collapse, entrepreneurs and eager investors flocked to this metropolis of tomorrow. Unprecedented growth and prosperity soon followed.

Unfortunately, entrenched interests and jealous rivals were hellbent on sabotaging Night’s vision and the unthinkable occurred: Richard Night was murdered in his own home by unknown assailants. Yet his creation—rechristened “Night City” in his honor—lived on. In the years that followed, it tossed off the yoke of United States rule and nimbly navigated unthinkable catastrophes—including a nuclear explosion that destroyed its very heart, Corporate Plaza—without the help of any sluggish and bloated national government. A shining beacon of success, the resilience of Night City continues to be an inspiration to the world.

For a massive modern metropolis, Night City is surprisingly walkable—you can get almost everywhere on foot. This is not, however, the quickest, safest or most fashionable way to travel around the city. Here’s a quick look at the alternatives.

Good news for car owners: you can park anywhere you like, for as long as you like. Paid parking was scrapped completely in the 2060s, partly in response to extreme violence directed at contractors cooperating with MeterMe!, a distributed parking enforcement startup.

If you need to buy a new car, you’ll have plenty to choose from, no matter the balance on your credchip. CHOOH2 stations are plentiful and now subject to an industry-run quality control board, meaning no more bad actors filling your tank with sugar water.

NCART, or Night City Area Rapid Transit, is a slick means for fast travel around town. Throngs of people use it every day, as it is the cheapest and often most convenient way to get where they need to get, when they need to get there. The system boasts many access points that form a net extending over the entire city and will whisk you from one to the other with as little hassle and headache as pulling up the latest hits on BlastDance.

We highly recommend the Delamain transportation service—these sturdy, AI-driven cars will take you anywhere for a surprisingly reasonable fare.

Located on the Middle-west part of the map, it is the heart of corporations, the cluster of neon and the quintessence of luxury.

Located on the North-West, it is an abandoned corporate giant now populated by immigrants, hiding various bazaars & markets in a tangle of narrow alleyways.

Areas outside the city limit. Mostly populated by Nomads.

Located Middle-East, Heywood is a massive suburban housing district with a predominantly Latino population, with an underlying gang problem.

Located to South-West, Pacifica is the most dangerous part of Night City.